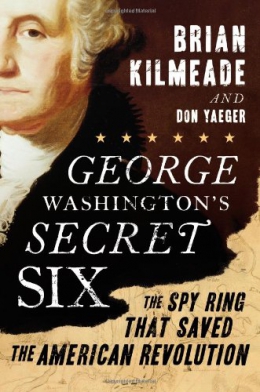 When General George Washington beat a hasty retreat from New York City in August 1776, many thought the American Revolution might soon be over. Instead, Washington rallied--thanks in large part to a little-known, top-secret group called the Culper Spy Ring. Washington realized that he couldn't beat the British with military might, so he recruited a sophisticated and deeply secretive intelligence network to infiltrate New York. So carefully guarded were the members' identities that one spy's name was not uncovered until the twentieth century, and one remains unknown today. But by now, historians have discovered enough information about the ring's activities to piece together evidence that these six individuals turned the tide of the war. Here, these spies finally take their place among the pantheon of heroes of the American Revolution.--From publisher description.

Hold New York, win the war -- The need for a spy ring -- Launching the ring -- Crossing the Sound -- The ring springs into action -- Townsend joins the fight -- Creating a code -- Mounting tensions and double-dealings -- Washington demands more -- The French connection -- Benedict and Peggy -- Negotiations and treachery -- The deal is done -- Another spy at the gallows -- The ring in peril -- The beginning of the end -- Retaking New York at last -- Life after the ring.