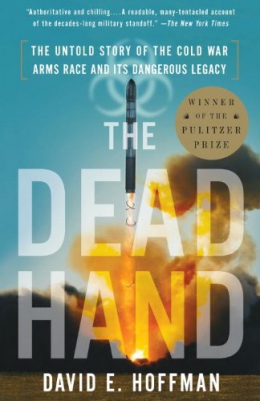 During the Cold War, superpowers amassed nuclear arsenals containing the explosive power of one million Hiroshimas. The Soviet Union secretly plotted to create the "Dead Hand," a system designed to launch an automatic retaliatory nuclear strike on the United States, and developed a fearsome biological warfare machine. President Ronald Reagan, hoping to awe the Soviets into submission, pushed hard for the creation of space-based missile defenses. This, the first full account of how the arms race finally ended, provides an unprecedented look at the inner motives and secret decisions of each side. Drawing on top-secret documents from deep inside the Kremlin, memoirs, and interviews in both Russia and the United States, David Hoffman introduces the scientists, soldiers, diplomats, and spies who saw the world sliding toward disaster and tells the gripping story of how Reagan, Gorbachev, and many others struggled to bring the madness to an end.--From publisher description.

At the precipice -- War games -- War scare -- The germ nightmare -- The anthrax factory -- The dead hand -- Morning again in America -- "We can't go on living like this" -- Year of the spy -- Of swords and shields -- The road to Reykjavik -- Farewell to arms -- Germs, gas and secrets -- The lost year -- The greatest breakthrough -- The year of living dangerously -- A great unraveling -- The scientists -- Revelations -- Yeltsin's promise -- Project sapphire -- Face to face with evil.