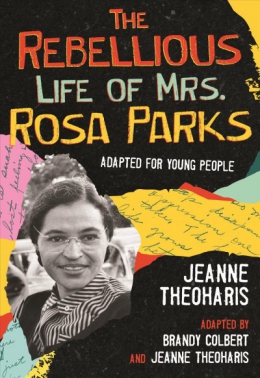 Rosa Parks is one of the most well-known Americans today, but much of what is known and taught about her is incomplete, distorted, and just plain wrong. Jeanne Theoharis and Brandy Colbert shatter the myths that Parks was meek, accidental, tired, or middle class. They reveal a lifelong freedom fighter whose activism began two decades before her historic stand that sparked the Montgomery bus boycott and continued for 40 years after. Readers will understand what it was like to be Parks, from standing up to white supremacist bullies as a young person to meeting her husband, Raymond, who showed her the possibility of collective activism, to her years of frustrated struggle before the boycott, to the decade of suffering that followed for her family after her bus arrest. The book follows Parks to Detroit, after her family was forced to leave Montgomery, Alabama, where she spent the second half of her life and reveals her activism alongside a growing Black Power movement and beyond.

A (shy) rebel is born -- Following rules and breaking some, too -- Introducing Raymond Parks : "The first real activist I ever met" -- The newest member of the NAACP -- Organizing in the face of opposition -- The NAACP Youth Council gets a fresh start -- Resistance + anger = seeds of change -- Claudette Colvin sits down (and rises up) -- Highlander Folk School -- Seeking justice for Emmett Till -- December 1, 1955 -- A boycott blossoms -- Rosa Parks goes to court -- A yearlong boycott -- The best of times and the worst of times -- Victory at last (but the struggle continues) -- "The Northern promised land that wasn't" -- Rosa Parks joins the fight up north -- The march on Washington for jobs and freedom -- Working for John Conyers -- Meeting Malcolm X -- Going (back) down South -- The Detroit uprising -- The assassination of Dr. King -- Black power! -- "Freedom fighters never retire" -- The struggle continues.