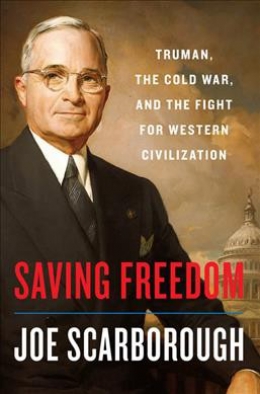 Saving Freedom : Truman, The Cold War, And The Fight For Western Civilization

Author Joe Scarborough recounts the historic forces that moved Truman toward his country|s long twilight struggle against Soviet communism, and how this untested president acted decisively to build a lasting coalition that would influence America|s foreign policy for generations to come. On March 12, 1947, Truman delivered an address before a joint session of Congress announcing a policy of containment that would soon become known as the Truman Doctrine. That doctrine pledged that the United States would |support free peoples who are resisting attempted subjugation by armed minorities or by outside pressures.| The untested president|s policy was a radical shift from 150 years of isolationism, but it would prove to be the pivotal moment that guaranteed Western Europe|s freedom, the American Century|s rise, and the eventual collapse of the Soviet Union.

A strange little man -- America alone -- Greek Fire -- Affairs of state -- Met at Armageddon -- The man from Missouri -- Gnawing away at Greece -- Steer clear of the foreign world -- Passing the torch -- A baptism of fire -- A new world order -- In this fateful hour -- Moving beyond Monroe -- A House Divided -- Personnel is policy -- "You must kill all Americans" -- Eleven minutes -- Cold War dawn -- An American triumph -- Aftermath.