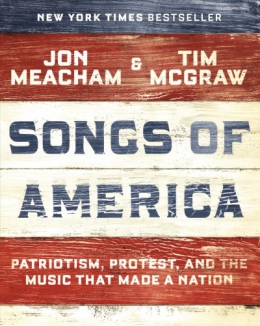 Songs Of America : Patriotism, Protest, And The Music That Made A Nation

From "The Star-Spangled Banner" to "Born in the U.S.A.," Jon Meacham and Tim McGraw take readers on a journey through eras in American history and the songs and performers that inspired us. Meacham chronicles our history, exploring the stories behind the songs, and Tim McGraw reflects on them as an artist and performer. Their perspectives combine to create a unique view of the role music has played in uniting and shaping a nation. Beginning with the battle hymns of the Revolution, and taking us through songs from the defining events of the Civil War, the fight for women's suffrage, the two world wars, the Great Depression, the civil rights movement, the Vietnam War, and into the twenty-first century, Meacham and McGraw explore the songs that defined generations, and the cultural and political climates that produced them. Readers will discover the power of music in the lives of figures such as Harriet Tubman, Franklin Roosevelt, Eleanor Roosevelt, and Martin Luther King, Jr., and will learn more about some of our most beloved musicians and performers, including Marian Anderson, Elvis Presley, Sam Cooke, Aretha Franklin, Bob Dylan, Duke Ellington, Carole King, Bruce Springsteen, and more.

A note to the reader -- Overture: The music of history -- The sensations of freedom -- Land where our fathers died -- Mine eyes have seen the glory -- March, march, many as one -- As the storm clouds gather -- We shall overcome -- Archie Bunker v. the age of Aquarius -- Born in the U.S.A. -- Finale: Lift every voice.