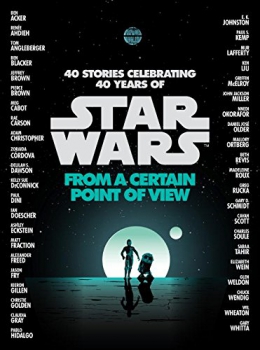 Star Wars : From A Certain Point Of View.

When Star Wars: A New Hope was first released in 1977, part of its appeal was that the world it presented felt alive. Landspeeders and starships were dirty. Droids broke down. And it was filled with cool, weird, and really weird background characters. (Really, just take a look around the Mos Eisley cantina.) Never mind Han, Luke, Leia, Darth Vader, and Obi-Wan. Who were these other guys? What was their story? Just seeing them brought up questions for fans that sparked the imagination. In celebration of Star Wars' 40th anniversary, this book shines the spotlight on those unsung weirdos, heroes, and villains with a unique, new anthology. Star Wars: From a Certain Point of View, brings together more than 40 authors for 40 stories. Each will be told from the perspective of background characters of A New Hope -- from X-wing pilots who helped Luke destroy the Death Star to the stormtroopers who never quite could find the droids they were looking for. There's never been a Star Wars book like it!