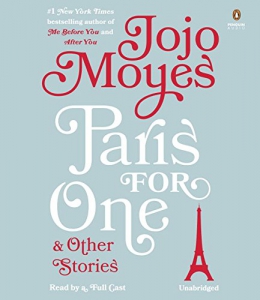 Paris For One & Other Stories [CD Book]

Nell is twenty-six and has never been to Paris. She's never even been on a romantic weekend away, to anywhere before. Everyone knows traveling abroad isn't really her thing. But when Nell's boyfriend fails to show up for their romantic mini-vacation, she has the opportunity to prove everyone, including herself wrong. Alone and in Paris, Nell uncovers a version of herself she never knew existed: independent and intrepid. Could this turn out to be the most adventurous weekend of her life? Also included are eight short stories featuring a cast of strong, relatable women in the midst of their everyday lives.

Paris for one -- Between the Tweets -- Love in the afternoon -- A bird in the hand -- Crocodile shoes -- Holdups -- Last year's coat -- Thirteen days with John C -- The Christmas list.