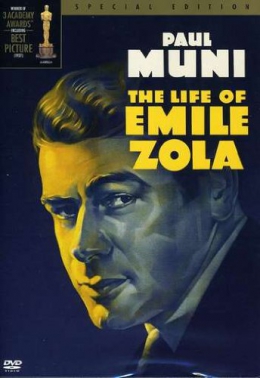 The Life Of Emile Zola [DVD]

place hold (0)
In 1862 Paris, Emile Zola is barely scratching out a living writing muckraking articles about the poverty of the French people and the corruption of their leaders. Until "Nana," about the life of a prostitute, becomes a smash hit and turns Zola into a celebrity, champion of the people. As he churns out a string of similar books that make him quite rich, his old friend Paul Cezanne tells him "An artist should remain poor." His determined intervention in the Dreyfus Affair, at the request of Dreyfus's wife Lucie, results in "J'accuse!" his famous denunciation of the Army, and leads to a conviction for libel. He flees to England, where he remains until granted amnesty. Unfortunately, he dies before the news that Dreyfus was exonerated and reinstated to full rank can reach him. Indicative of the mores of its time, during the course of this clear story about institutionalized anti-Semitism, the word "Jew" is never mentioned. And while most Hollywood biographies must be taken with a grain--if not a handful--of salt, the film makes a reasonable effort at accuracy and completeness.

Credits -- Job for Emile -- Official warning -- Injustice all around -- Nana's story -- "Nana's" profits -- "Downfall" -- Defying the censor -- Cezanne's goodbye -- Traitor in their midst -- Arrested for treason -- "I'm innocent!" -- You must survive -- Military maneuvers -- Lucie appeals to Zola -- I accuse -- Inflaming the mob -- On trial -- Picquart testifies -- Written and unspoken -- Intolerance all around -- Let truth conquer -- Another closed case -- Honor of the army -- Homecomings to France -- By force of ideas -- Moment of conscience -- Cast list.