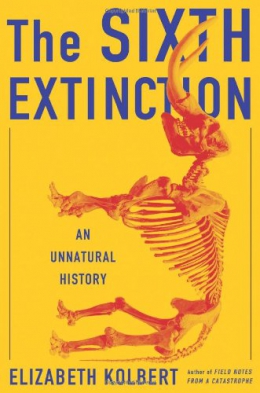 The Sixth Extinction : An Unnatural History

Over the last half billion years , there have been five major mass extinctions, when the diversity of life on Earth suddenly and dramatically contracted. Scientists are currently monitoring the sixth extinction, predicted to be the most devastating since the asteroid impact that wiped out the dinosaurs. This time around the cataclysm is us. In this book the author tells us why and how human beings have altered life on the planet in a way no species has before. She provides a moving account of the disappearances of various species occurring all around us and traces the evolution of extinction as concept, from its first articulation by Georges Cuvier in revolutionary Paris up to Lyell and Darwin, and through the present day. The sixth extinction is likely to be mankind's most lasting legacy, compelling us to rethink the fundamental question of what it means to be human.

The sixth extinction -- The mastodon's molars -- The original penguin -- The luck of the ammonites -- Welcome to the Anthropocene -- The sea around us -- Dropping acid -- The forest and the trees -- Islands on dry land -- The new Pangaea -- The rhino gets an ultrasound -- The madness gene -- The thing with feathers.